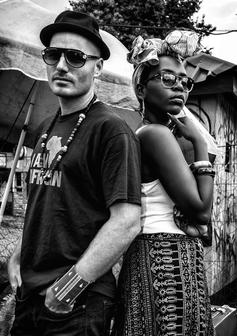 "... We say, just keep doing what you're doing, crazy white man." (Guardian Network Africa). Danish born Mzungu Kichaa has spent much of his childhood living in Africa - and this is where he has transformed himself into Mzungu Kichaa which means something along the lines of "the crazy white man." Mzungu Kichaa is currently a musical star in East Africa where he broke through in 2009 with the album "Tuko Pamoja" and the hit single "Jitolee" featuring local stars Professor Jay and Mwasiti. In 2010, Mzungu Kichaa became the judge in Bongo Star Search, the Tanzanian equivalent to X-Factor, and in 2012 he released his EP "Hustle". The first single from this release is called "African Hustle" and is a duet with Kenyan star, Dela. Mzungu Kichaa has been nominated twice for a Danish World Music Award - in 2009 in the category "Best World Album" for "Tuko Pamoja" and in 2012 "Twende Kazi" was a candidate for "Best World Track". Mzungu Kichaa plays the special urban style of music called Bongo Flava that mixes reggae, rap, afrofusion and traditional Tanzanian music.